When I was thirteen years of age, I was doubly orphaned. My mother had passed away when I was a child, and then, when I was almost fourteen years old, I lost my father as well. I had to move into yeshiva full-time, as I had no other place to go. 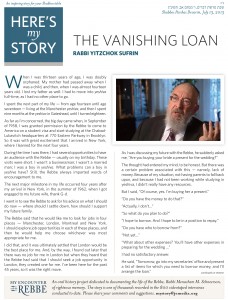 I spent the next part of my life – from age fourteen until age seventeen – living at the Manchester yeshiva, and then I spent nine months at the yeshiva in Gateshead, until I turned eighteen.

As far as I’m concerned, the big day came when, in September of 1958, I was granted permission by the Rebbe to come to America on a student visa and start studying at the Chabad-Lubavitch headquarters at 770 Eastern Parkway in Brooklyn. So it was with great excitement that I arrived in New York, where I learned for the next four years.

During the time I was there, I had several opportunities to have an audience with the Rebbe – usually on my birthday. These visits were short. I wasn’t a businessman; I wasn’t a married man; I was a boy in yeshiva. What problems can a boy in yeshiva have? Still, the Rebbe always imparted words of encouragement to me.

The next major milestone in my life occurred four years after my arrival in New York, in the summer of 1962, when I got engaged to my future wife, thank G-d.

I went in to see the Rebbe to ask for the Rebbe’s advice on what I should do now – where should I settle down, how should I support my future family. The Rebbe said that he would like me to look for jobs in four places – Manchester, London, Montreal and New York. I should explore job opportunities in each of these places, and then he would help me choose whichever was most appropriate for me. 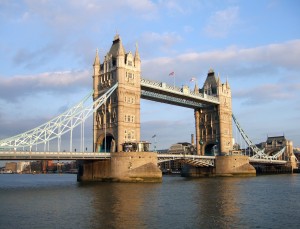 I did that, and it was ultimately settled that London would be the best place for me. And, by the way, I found out later that there was no job for me in London but when they heard that the Rebbe had said that I should seek a job opportunity in London, they created one for me. I’ve been here for the past 45 years, so it was the right move.

As I was discussing my future with the Rebbe, he suddenly asked me, “Are you buying your bride a present for the wedding?”

The thought had entered my mind, to be honest. But there was a certain problem associated with this – namely, lack of money. Because of my situation, not having parents to fall back upon, and because I had not been working while studying in yeshiva, I didn’t really have any resources.

“Do you have the money to do that?”

“I hope to borrow. And I hope to be in a position to repay.”

“Do you have who to borrow from?”

I had no satisfactory answer.

He said, “Tomorrow, go into my secretaries’ office and present a list of items for which you need to borrow money, and I’ll arrange the loan.” 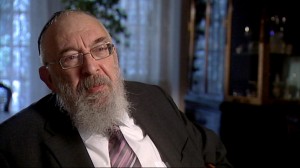 I did that. The next day, I walked in with a list of things which

included my bride’s present, the other costs required in preparing for the wedding, and tickets to England for the two of us. It came out to $1,200. That might not sound like a lot today, but it was a lot of money back then – so much that the secretaries tried to bargain me down. Still, I got the $1,200. I was to repay it at the rate of $50 a month for 24 months, so that within two years the debt would be cleared.

Okay, I was a youngster, full of hope, and I was sure everything was going to be fine – no doubt, I would get a fortune in wedding gifts…

I bought my bride a beautiful present – so nice that she still tells people about it, and encourages newly-engaged fellows to do the same for their brides-to-be. She tells them, “My husband was told by the Rebbe to buy his wife a present.”

We arrived in England, I started working, and from my wages I faithfully repaid $50 a month for the first two months. But my salary was just about enough to cover my rent and some basic necessities, but it did not leave sufficient funds to pay back $50 a month. Somehow or other, a few months later, I managed to make a third payment.

Then it dried up. I just did not have the ability to repay that loan. And I started to get reminders from the office. When you get reminders, you eventually pay some more, so I made a fourth payment and brought my debt down to $1,000.

I got further reminders, but my financial situation did not improve and I was unable to repay the debt at that time. So I wrote a letter to the Rebbe, asking for a blessing for sustenance and livelihood, and saying that I was finding life a bit difficult in that respect.

I’m sure he gave me his blessing – I have no doubt about it. But the strongest point, which was the clearest indication of his care, was that from that point on, I never got another reminder from his office to repay my debt. In no way, shape or form whatsoever. I heard nothing at all.

Thank G-d, with time, things improved, and there was a moment when I was able to actually amass the amount I still owed. I came to New York, feeling very happy with myself. I went into the office and I said, “I have a debt I wish to repay.”

They asked me my name, the details, the year the loan was made, to look it up in the files. But there was no record whatsoever of any debt in my name – nothing outstanding. Nothing could be found at all in the records that such a loan ever even existed. They couldn’t find anything!

They said, “Well, you don’t owe anything!”

I said, “I’m sorry, the Rebbe made the loan; he took the initiative

and he arranged it for me. I do not wish to remain in debt. Here is the money – enter it in your books however you wish, and let’s end this story.”

It was then that I realized then how great was the Rebbe’s sensitivity. He knew I had no family, that I was dependent on others, that my resources were highly restricted. And he felt for me like a father. After first offering me that loan, he later took care of it for me. I will always be grateful for this.

Rabbi Yitzchok Tzvi Sufrin is a Shliach in London since 1963. Currently, in addition to his Lubavitch work, he is the rabbi of the Enfield and Winchmore Hill United Synagogue. He was interviewed in January, 2009.

This week’s Here’s My Story is dedicated

No Comments to “HMS: The vanishing loan”