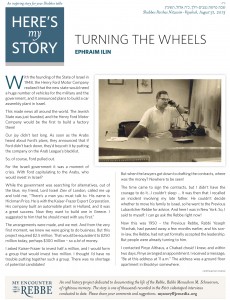 With the founding of the State of Israel in 1948, the Henry Ford Motor Company realized that the new state would need a huge number of vehicles for the military and the government, and it announced plans to build a car assembly plant in Israel.

This made news all around the world. The Jewish State was just founded, and the Henry Ford Motor Company would be the first to build a factory there!

Our joy didn’t last long. As soon as the Arabs heard about Ford’s plans, they announced that if Ford didn’t back down, they’d boycott it by putting the company on the Arab League’s blacklist.

So, of course, Ford pulled out.

For the Israeli government it was a moment of crisis. With Ford capitulating to the Arabs, who would invest in Israel?

While the government was searching for alternatives, out of the blue, my friend, Lord Israel Ziev of London, called me up and told me, “There’s a man you must talk to. His name is Hickman Price. He is with the Kaiser-Frazer Export Corporation. His company built an automobile plant in Holland, and it was a great success. Now they want to build one in Greece. I suggested to him that he should meet with you first.”

The arrangements were made, and we met. And from the very first moment, we knew we were going to do business. But this project required $2.5 million. That would be equivalent to $250 million today, perhaps $300 million – so a lot of money. 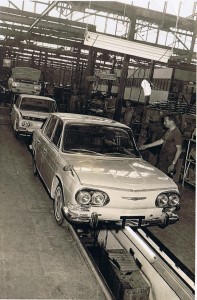 I asked Kaiser-Frazer to invest half a million, and I would form a group that would invest two million. I thought I’d have no trouble putting together such a group. There was no shortage of potential candidates!

But when the lawyers got down to drafting the contracts, where was the money? Nowhere to be seen!

The time came to sign the contracts, but I didn’t have the courage to do it…I couldn’t sleep … It was then that I recalled an incident involving my late father. He couldn’t decide whether to move his family to Israel, so he went to the Previous Lubavitcher Rebbe for advice. And here I was in New York. So, I said to myself: I can go ask the Rebbe right now!

Now this was 1950 – the Previous Rebbe, Rabbi Yoseph Yitzchak, had passed away a few months earlier, and his son-in-law, the Rebbe, had not yet formally accepted the leadership. But people were already turning to him.

I contacted Pinye Althaus, a Chabad chasid I knew, and within two days, Pinye arranged an appointment. I received a message, “Be at this address at 11 a.m.” The address was a ground floor apartment in Brooklyn somewhere.

I was moved just seeing the Rebbe. I felt I was standing in front of a giant. And, yet, at the same time he was such a wonderful person, so good, so knowledgeable.

We spoke in three languages: Russian, French – he spoke excellent French – and Hebrew. I was with him for about forty minutes. I remember he was very interested in my past involvement in Etzel, the Jewish underground, my experiences in the British prisons and during the War of Independence, and how I had gotten to where I was in life…

Then I told him about the car company proposal. Since the Rebbe himself was educated as an engineer, he knew more about cars than I did. I seem to recall that he said, “A car is made up of 30,000 parts. That doesn’t mean 30,000 industries, but it does mean 3,000!”

You have to understand: A car assembly plant is a trade school for at least fifty vocations: metalwork, painting, carpentry, upholstery, etc. This was very important, because Jews were coming to Israel straight from the concentration camps. They were not skilled in the slightest; they were Holocaust survivors… 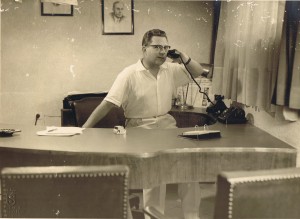 He said, “This plant could be the foundation for all of Israel’s industry!” He saw the larger picture, on the national scale. And then he said, “I see that throughout your life you’ve encountered many obstacles,

but God was behind you. God will be behind you in the future, as well. And if, for some reason, things don’t work out, then whatever happens, you will be among your fellow Jews and you’ll always find a way to survive.”

I no longer remember all his exact words, but I will never forget the wisdom, the kindheartedness, and the quiet way he spoke… A feeling of tranquility came over me.

When I left, I felt as if a heavy stone had been lifted from my heart. I knew that I would sign the contracts – and that’s what I did.

Our company took off. In the first ten years, we produced twenty-eight percent of Israel’s entire gross domestic product! Our exports reached all the way to Argentina, Brazil, Colombia – and closer to home, we reached Turkey, France, Scandinavia, Finland and Sweden. We even reached South Africa.

The work was enormous, the expenses were enormous, but that was what built industry in Israel.

Efraim Ilin built Israel’s first automobile assembly plant, Kaiser-Frazer of Israel, in 1951. An industrialist, philanthropist and art patron, he passed away in 2010 at age 98. He was interviewed in his home in Tel Aviv, in September, 2009.

This week’s Here’s My Story is dedicated

In merit of Alona Bas Bititya

No Comments to “HMS: Turning the wheels”

Click here to cancel reply.
HMS: “Deep down, a spark” HMS: The role of a Journalist