Home » Uncategorized » HMS: “No reason to be discouraged”

HMS: “No reason to be discouraged”
29 January 2014
Goto comments Leave a comment

I grew up in Montreal. Until I was twelve years of age, I was an only child. My parents were both deaf-mutes and my grandfather and my uncle lived with us. Our home was kosher, and I was raised with good Jewish values, but I did not receive much of an education in Judaism nor did I attend yeshiva. 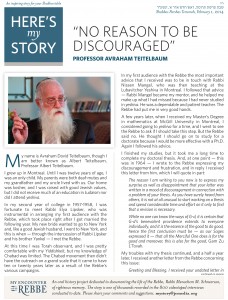 In my second year of college in 1957-1958, I was fortunate to meet Rabbi Elya Lipsker, who was instrumental in arranging my first audience with the Rebbe, which took place right after I got married the following year. My new bride wanted to go to New York and, like a good Jewish husband, I went to New York, and this is when – through the intercession of Rabbi Lipsker and his brother Yankel – I met the Rebbe.

At this time I was Torah observant, and I was pretty comfortable with my Yiddishkeit, but my knowledge of Chabad was limited. The Chabad movement then didn’t have the outreach on a grand scale that it came to have ten or twenty years later as a result of the Rebbe’s various campaigns.

In my first audience with the Rebbe the most important advice that I received was to be in touch with Rabbi Nissen Mangel, who was then teaching at the Lubavitcher Yeshiva in Montreal. I followed that advice – Rabbi Mangel became my mentor, and he helped me make up what I had missed because I had never studied in yeshiva. He was a dependable and patient teacher. The Rebbe had put me in very good hands.

A few years later, when I received my Master’s Degree in mathematics at McGill University in Montreal, I considered going to yeshiva for a time, and I went to see the Rebbe to ask if I should take this step. But the Rebbe said no. He thought I should go on to study for a doctorate because I would be more effective with a Ph.D. Again I followed his advice.

I finished my studies, but it took me a long time to complete my doctoral thesis. And, at one point – this was in 1964 – I wrote to the Rebbe expressing my discouragement and frustration, and in reply I received this letter from him, which I will quote in part:

The reason I am writing to you now is to express my surprise as well as disappointment that your letter was written in a mood of discouragement in connection with a problem of your thesis. As you have surely heard from others, it is not at all unusual to start working on a thesis and spend considerable time and effort on it only to find that a revision is necessary. 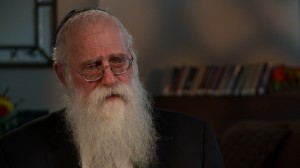 While no one can know the ways of G-d, it is certain that G-d’s benevolent providence extends to everyone individually, and it is the essence of the good to do good, hence the first conclusion must be – as our Sages expressed it – that all the Merciful One does is for the good and moreover, this is also for the good, Gam Zu L’Tovah.

My troubles with my thesis continued, and half a year later, I received another letter from the Rebbe concerning this issue:

Greeting and Blessing. I received your undated letter in which you write about the disappointing attitude which the director of your thesis took toward it, declaring that he has found a simple solution of the general problem. Accordingly, this would entail additional work etc.

….Be it as it may, there certainly is no reason to be discouraged and G-d – whose benevolent providence extends to everyone individually – will surely lead you in the way that is good for you both materially and spiritually.

And the Rebbe closed the letter with a reference to an organization that I had mentioned to him which was concerned with the study of philosophy, science and religion. He wrote:

I trust that your visit with the group will be a stimulating one and that you will share the inspiration with many others in your environment, always bearing in mind that words coming from the heart penetrate the heart. With blessing, M. Schneerson 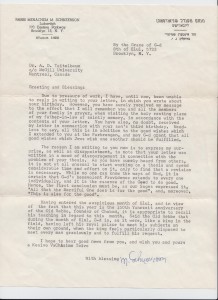 Shortly after this exchange, I decided to scrap my thesis topic and start fresh, and I was assigned a new thesis advisor. Things went much more smoothly and within three years – that is, by 1967 – I had my Ph.D.  And once that happened I was promoted, and I got into research in statistics in a particular area which lent itself to consulting. This is what I am still doing till this day, and it is work which I truly enjoy.

And I do believe that I owe a great deal to the Rebbe’s advice at the vulnerable times in my life. The Rebbe impressed upon me that everything that Hashem does is for the good even if we don’t always see the reason for it. And most of all, I am grateful for the Rebbe’s perceptiveness in recognizing the type of person that I am and the direction I needed to follow, and especially in giving me encouragement when I needed it most.

Dr. Albert Teitelbaum was a professor of mathematics at McGill University until his retirement in 1996. He was interviewed in Montreal in January, 2011.

No Comments to “HMS: “No reason to be discouraged””