I grew up in Crown Heights, and as a child I studied at Yeshiva Torah Vodaas, but by the time I was fifteen I left and went to a regular boys’ high school. The reason I left is that I felt too restricted there and I wanted to get a broader education. But, although I left Torah Vodaas, I never left Yiddishkeit – I always remained an observant Jew.

At age eighteen I went into the US army for three years – this was between 1943 and 1946 – and served a year overseas, where I worked with DPs, displaced persons. This was a formative experience for me, and it left a deep impression. Seeing the aftermath of the Holocaust, I came to the conclusion that Judaism had to survive, and the only way for it to survive was through Torah. 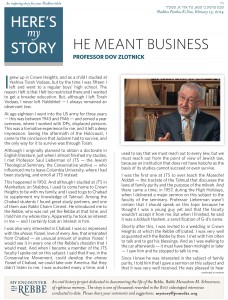 Although I originally planned to obtain a doctorate in English literature, just when I almost finished my studies, I met Professor Saul Lieberman of JTS – the Jewish Theological Seminary, the Conservative yeshiva – who influenced me to leave Columbia University, where I had been studying, and enroll at JTS instead.

This happened in 1950. And although I studied at JTS in Manhattan, on Shabbos, I used to come home to Crown Heights to be with my family, and I used to go to Chabad to supplement my knowledge of Talmud. Among the Chabad students I found great study partners, and one of them was Rabbi Chaim Ciment. He introduced me to the Rebbe, who was not yet the Rebbe at that time, and I told him my whole story. Apparently, he took an interest in me – and I certainly took an interest in him.

I was also very interested in Chabad. I was so impressed with the ahavas Yisrael, love of every Jew, that emanated from Chabad – an unusual amount of avahas Yisrael. I would see it in every one of the Rebbe’s chasidim that I would meet. And when I became a member of the JTS faculty I spoke out on this subject. I said that if we, in the Conservative Movement, could develop the ahavas Yisrael of Chabad, we could take over America. But they didn’t listen to me. I was outvoted many a time, and I used to say that we must reach out to every Jew, but we must reach out from the point of view of Jewish law, because an institution that does not have halacha as the basis of its studies cannot succeed or even survive.

I was the first one at JTS to ever teach the Masechet Niddah – the tractate of the Talmud that discusses the laws of family purity and the purpose of the mikvah. And there came a time, in 1967, during the High Holidays, when I delivered a major sermon on this subject to the faculty of the seminary. Professor Lieberman wasn’t certain that I should speak on this topic because he thought I was a young guy yet and that the faculty wouldn’t accept it from me. But when I finished, he said it was a kiddush Hashem, a sanctification of G-d’s name. 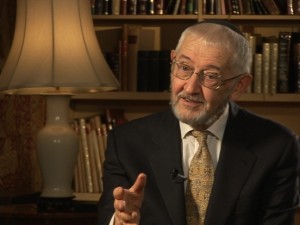 Shortly after this, I was invited to a wedding in Crown Heights at which the Rebbe officiated. I was very well acquainted with the Rebbe by then. I met with him often to talk and to get his blessings. And as I was walking to the car afterwards – it must have been midnight or later – I saw him and he stopped to talk to me.

Since I knew he was interested in the subject of family purity, I told him that I gave a sermon on this subject and that it was very well received. He was pleased to hear it and he said, “You have to publish it.” I said, “I don’t publish sermons. I try to publish scholarship – books, articles – but not sermons.” And I thanked him and left.

A couple of days later I got a call from the Rebbe’s secretary, Rabbi Hodakov, who said, “The Rebbe wants to know what’s happening with the sermon? He wants you to publish it.” Again I said, “I don’t publish sermons.” And I thanked him. That was the end of it … or so I thought.

About a month later I get another call from Rabbi Hodakov, “What’s with that sermon?” And I realized that the Rebbe means business.

At that time Rabbi Saul Teplitz was publishing a book of the best sermons of the year, so I gave the sermon to him. And he chose it from among hundreds and published it in this collection. When he published it, I got off-prints and I sent this out to every member of the Rabbinical Assembly – to every Conservative rabbi.

And when, a year later, I went to Israel for a sabbatical, the Rebbe said, “Now you have to translate into Hebrew.” I did that, and it was distributed there to every mikvah. 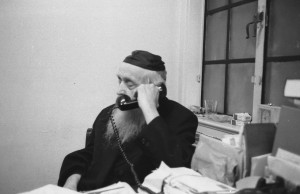 When I came back from Israel, I got a call from Rav Zalman Shimon Dvorkin who was an authority in halacha for Lubavitch, and to whom I was very close. He said, “A mikvah was built because of your sermon!”

How did that happen? A community in Canada wanted to build a mikvah, but they didn’t have enough money. So they turned to the Conservative congregation to contribute, but they felt that it was not an important issue for the Conservative Movement, so they wouldn’t participate. But, around this time, a physician in that congregation got a hold of the sermon and said, “How can you say this is not an important issue? Here is a rabbi at JTS who devoted a whole sermon to it!” He passed the sermon around, and they reconsidered their decision and ultimately helped build a mikvah in this community.

Dov Zlotnick, author and professor emeritus at Jewish Theological Seminary, was interviewed in Israel in December of 2006.

No Comments to “HMS: He Meant Business”