Home » Uncategorized » The Power To Walk

The story that I’m about to tell you took place in the early months of 1988. I was running the advertising department of 47th Street Photo, which was a half-a-billion dollar company at the time, considered the largest photography store for graphic equipment in the world. And it had one of the largest in-house advertising agencies in New York City. We would place hundreds of ads with the New York Times yearly, (at times spending in excess of $350,000 a month!) and, as a result, we had a great deal of clout with them. 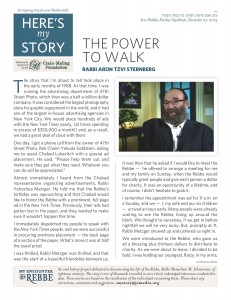 One day, I got a phone call from the owner of 47th Street Photo, Reb Chaim Yehuda Goldstein, asking me to assist Chabad Lubavitch with ad placement. He said, “Please help them out and make sure they get what they need. Whatever you can do will be appreciated.”

Almost immediately I got a call from the Chabad representative, Reb Yehoshua Metzger. He told me that the Rebbe’s birthday was approaching and Chabad would like to honor the Rebbe with a prominent, full page ad in the New York Times. Previously, their ads had gotten lost in the paper, and they wanted to make sure it wouldn’t happen this time.

I immediately dispatched my people to speak with the New York Times editors, and we were successful in procuring premiere placement – the back page of a section of the paper at half the usual price! Instead of paying $25,000, Chabad paid $12,500 – a substantial savings.

I was thrilled, Reb Metzger was thrilled, and that was the start of a beautiful friendship between us. It was then that he asked if I would like to meet the Rebbe – he offered to arrange an audience for me and my family during the “Sunday dollars,” when the Rebbe would greet people and give each person a dollar to be given to charity. It was an opportunity of a lifetime, and of course, I didn’t hesitate to grab it.

I remember the appointment was set for 11 a.m. on a Sunday, and I, my wife, and our six children and I arrived an hour early. Many people were already waiting to see the Rebbe, lining up around the block. We thought to ourselves, if we get in before nightfall we will be very lucky. But, promptly at 11, Reb Metzger showed up and ushered us right in.

We were introduced to the Rebbe, who gave us all a blessing plus thirteen dollars to distribute to charity. As we were about to leave, I decided to be bold. I was holding our youngest, Raizy, in my arms, and I told the Rebbe what was troubling me and my wife about this child.

She was eighteen months old, yet she wasn’t even standing or crawling, when she should have been walking already. Our pediatrician had recommended that we take her to a neurologist, and we’d made an appointment for ten days later. I explained all this to the Rebbe, and I asked him for a special blessing for Raizy.

The Rebbe turned to me with a smiling face and said, “Der aibershter zol helfen, du vest ir firen tzumchuppah besha’ah tova umutzlachas – With G-d’s help, you will lead her to the marriage canopy in a good and auspicious time.”

We walked out treasuring the experience, and the rest of the week proceeded as normal. Then came Shabbos. This was three days before Raizy was to see the neurologist.

As was my custom on Shabbos morning, I took my four older boys with me to the synagoge. I returned around noontime, walked up the stairs into the front entrance of my house, and I called out Gut Shabbos! My wife was sitting in the living room with Raizy on the floor to the left of the entrance. Seeing me come in, Raizy picked herself up – never having walked or even crawled before – and walked toward me across the living room floor! She walked approximately 15 feet!

Both my wife and I were just beyond words. We had no idea what prompted this sudden dramatic change in Raizy’s behavior, but we both saw it as a miracle. There was no question about it in our minds. The child literally picked herself up and started walking, without ever even having crawled before. I was so taken aback that, forever after, I felt tremendous gratitude to the Rebbe for what transpired.

Of course, we cancelled the appointment with the neurologist. There was no reason to take her. And Raizy grew up a normal child in every way. We saw her to the chuppah as the Rebbe promised. Today, she is the mother of a couple of children and a perfect balabusta. We expect to see much more nachas from her.

Since the time the Rebbe passed away, I make the trek to the Rebbe’s resting place quite often. Because I have such a strong belief that he is guiding my family, and the gratitude that I feel to him for being our emissary to the Creator of the World is unbounded.

Aron Tzvi Sternberg is the Administrator for Talmud Torah Adas Yereim in Monsey, New York. He was interviewed in the My Encounter Studios in September of 2013.

This Weeks Here’s My Story is generously sponsored:

in honor of a complete and speedy recovery for

No Comments to “The Power To Walk”

Click here to cancel reply.
Every Child Matters “They Are Observant”