I was born in 1938 in Poland, right before the Second World War broke out. During the war I was hidden with a non-Jewish family, and only with G-d’s help did I manage to survive. After the war my mother located me and – with no home left to go to –placed me temporarily in an orphanage near Paris, headed by Rabbi Zalman Schneerson, a Lubavitcher chasid who worked tirelessly to locate Jewish children hidden in Christian homes during the war.

It was there that I received my Jewish education and was taught how to read Hebrew and how to pray. One day, in 1947, we were told that we were expecting an important visitor, and we were to dress in our finest. When he arrived I remember that he was a tall man and very distinguished looking. He spoke to each one of us – one by one – thirty children in all. He asked us our names and then quizzed each child with an easy question, such as: “What blessing do you make on an apple?” 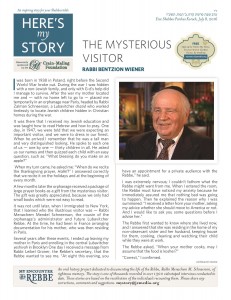 When my turn came, he asked me: “When do we recite the thanksgiving prayer, Hallel?” I answered correctly that we recite it on the holidays and at the beginning of every month.

A few months later the orphanage received a package of large prayer books as a gift from the mysterious visitor. The gift was greatly appreciated, because we only had small books which were not easy to read.

It was not until later, when I immigrated to New York, that I learned who the illustrious visitor was – Rabbi Menachem Mendel Schneerson, the cousin of the orphanage’s administrator and future Lubavitcher Rebbe. At the time, he had been in France arranging documentation for his mother, who was then residing in Paris.

Several years after these events, I ended up leaving my mother in Paris and enrolling in the central Lubavitcher yeshivah in Brooklyn One day I received a message from Rabbi Leibel Groner, the Rebbe’s secretary, that the Rebbe wanted to see me. “At eight this evening, you have an appointment for a private audience with the Rebbe,” he said.

I was extremely nervous; I couldn’t fathom what the Rebbe might want from me. When I entered the room, the Rebbe must have noticed my anxiety because he immediately assured me that nothing bad was going to happen. Then he explained the reason why I was summoned: “I received a letter from your mother, asking my advice whether she should move to America or not. And I would like to ask you some questions before I advise her.”

The Rebbe first wanted to know where she lived now, and I answered that she was residing in the home of my non-observant sister and her husband, keeping house for them, cooking, cleaning and watching their child while they were at work.

The Rebbe asked, “When your mother cooks, may I assume that the food is kosher?”

“And when they are at work, when they go out to the cafes, do they eat non-kosher food?”

Again I answered in the affirmative.

“If one can prevent a Jew from eating non-kosher food even one time, then that is an amazing accomplishment,” he stated. “If your mother remains in Paris and continues housekeeping for them, then at least your sister will have a kosher home. In that case, your mother should not leave them and come to the United States. I will write her my answer, but please also write to her yourself and tell her that this is what I said.”

I dutifully informed my mother of the Rebbe’s advice, and she lived with my sister for another ten years.

I continued my studies in New York until one day it was decided that ten yeshivah students should move to Newark, New Jersey, in order to establish a yeshivah there, and I was informed that I would be among them. Well, I did not want to go, and I let my teacher, Rabbi Yisrael Jacobson, know my feelings. He replied that it was too late because the list of names had already been approved by the Rebbe, and he preferred not to make any changes. I begrudgingly agreed and joined the group going to Newark.

One Shabbat, when we returned briefly to New York to participate in a farbrengen, the Rebbe asked that we – the ten yeshivah students – should come to the dais and say l’chaim. Of course, we all went up and when the Rebbe saw me he asked me in French, “Ca va bien – So, is everything going well?”

I answered that it was, and I saw a big smile appear on the Rebbe’s face. I did not know how the Rebbe knew about my initial opposition to going to Newark – perhaps Rabbi Jacobson informed him – but what surprised me the most was that, so many months later, the Rebbe remembered that I had not been happy.

But it was not just the Rebbe’s interest and care that I will always remember; it was his insight and advice as well.

Once, in an audience with the Rebbe I mentioned something that had been bothering me. I had lent a friend a large sum of money and I never saw the money again. I asked, “How could it be that after performing a good deed by helping another person, I should lose out so much? How could G-d allow that to happen?”

The Rebbe answered, “Sometimes it is ordained from Heaven that a person should lose his money by paying doctors’ bills or some other kind of misfortune. Yet, when such a decree is in place but has not been enforced as yet, we get a chance to lose the same amount in a different, kinder way – by performing a good deed.”

I surprised myself by asking this question, yet in the Rebbe’s presence I felt encouraged to open up. I was glad that I did ask, as now I could view misfortunes in a totally different light. Instead of losing money with tears, I could lose it with a smile.

Rabbi Bentzion Wiener’s mother served as an attendant for the Rebbe’s mother, Rebbetzin Chana, for four years. He was interviewed in Brooklyn, NY in November of 2009.

In loving memory of

200 Years of Hindsight How to Publish a Newspaper