I connected with Lubavitch early on in life, when I enrolled in the Chabad Yeshiva College in Melbourne and I kept the connection even after I moved on to other schooling. . And, after university, I went to work for Lubavitch, running the youth organization in Australia, Tzeirei Agudas Chabad.

My first personal encounter with the Rebbe took place in 1974, when I was 21. I was among a group of young men from Australia who came to New York, and I got to see him privately for a few minutes. Walking in, I handed him a note with my name on it, but instead of writing my full Hebrew name, which is Raphael Yonason, I just wrote Raphael. The Rebbe looked at the note and said, “You should make sure that you are called by the correct name.” How did the Rebbe know that this was not my correct name? I have no idea. 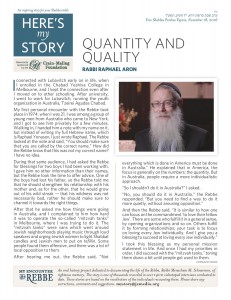 During that same audience, I had asked the Rebbe for blessing for two boys I had been working with. I gave him no other information than their names, but the Rebbe took the time to offer advice. One of the boys had lost his father, so the Rebbe told me that he should strengthen his relationship with his mother and, as for the other, that he would grow out of his wild streak – that his wildness was not necessarily a bad thing, rather he should make sure to channel it towards the right things.

After that he asked me how things were going in Australia, and I complained to him how hard it was to operate the so-called “mitzvah tanks” in Melbourne, where I was trying to do it. The “mitzvah tanks” were vans which went around Jewish neighborhoods playing music through loud speakers and urging Jewish women to light Shabbat candles and Jewish men to put on tefillin. Some people found them offensive, and there was a lot of local opposition to them.

After hearing me out, the Rebbe said, “Not everything which is done in America must be done in Australia.” He explained that in America, the focus is generally on the numbers; the quantity. But in Australia, people require a more individualistic approach.

“So I shouldn’t do it in Australia?” I asked.

“No, you should do it in Australia,” the Rebbe responded. “But you need to find a way to do it more quietly, without arousing opposition.”

I took this blessing as my personal mission statement in life. And once I had my priorities in order, I did succeed with the “mitzvah tanks,” toning them down a bit until people got used to them.

After I got married, I got involved in running the girls’ programs Bnos Chana and Ohel Chana.

During this time, I had a student at Ohel Chana who was struggling with her personal issues. I encouraged her to write to the Rebbe, which she did. She wrote a very short, two-sentence letter which read something like, “Dear Rebbe, I’m having a very hard time. I don’t know if I want to stay here.”

The Rebbe responded with a detailed, three-page letter! It was amazing – phenomenal really! – because he wrote to her about things that she never mentioned in her letter, like for example, the divorce of her parents. He advised her to develop a separate relationship with each parent and not to get involved in their fight with each other. “You have a father and you have a mother,” the Rebbe wrote. “They were your father and your mother before they were divorced, and they always will be. Therefore, you have to nurture the relationship you have with each of them and dismiss the thought that your family is not the way you would like it to be.”

This girl was just amazed by this letter, and she took his advice to heart. Her parents were feuding and fighting, and she was feeling very much compromised. And then the Rebbe showed her that, despite of all that was going on, she could continue to maintain a separate relationship with each of them. But what blew her away more than anything else was that she never confided any of this in the Rebbe, so how did he know?

At times, it seemed to me that he knew everything. But without a doubt, he paid attention to everything.

Once I published a brochure advertising a seminar for girls’ counselors. There was a little extra space on the page and, rather than leaving it blank, I filled it in with a Torah verse which has become a Chabad slogan: “Uforatzta yama vakeidma tzafona vanegba – You shall spread to the west, to the east, to the north and to the south.”

I sent this brochure to the Rebbe, and I got a letter back right away in which the Rebbe pointed out that I had left out a single letter – a tiny vav – from the word tzafona.

Now that quotation was in very small print, yet the Rebbe still caught this one little missing letter. I was moved and amazed. How much attention did the Rebbe pay to everything and everyone. He paid attention to every word, every letter, every human being, and every soul.

Rabbi Raphael Aron, a counselor and therapist, is the director of the Gateway Family Counselling Centre in Melbourne, Australia. He was interviewed in his home in June of 2016.

In honor of Nochum Segal Q.C.’s 75th birthday for a long and healthy good life.

By Rabbi Ronnie and Simcha Fine and family

The Stray Kitten Beautiful on the Inside