Home » Uncategorized » The Gift of Speech

Although we were a Modern Orthodox family, in 1954, shortly before I turned sixteen, my father enrolled me in the Chabad yeshivah in New York.  As was the custom in the yeshivah, on the day of my birthday, I was sent to receive a blessing from the Rebbe. This was only a short while after I had joined the yeshivah, and I had never met the Rebbe before. 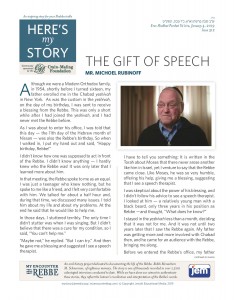 As I was about to enter his office, I was told that this day – the 11th day of the Hebrew month of Nissan – was also the Rebbe’s birthday. So when I walked in, I put my hand out and said, “Happy birthday, Rebbe!”

I didn’t know how one was supposed to act in front of the Rebbe. I didn’t know anything – I hardly knew who the Rebbe was! It was only later that I learned more about him.

In that meeting, the Rebbe spoke to me as an equal. I was just a teenager who knew nothing, but he spoke to me like a friend, and I felt very comfortable with him. We talked for about a half hour and, during that time, we discussed many issues. I told him about my life and about my problems. At the end he said that he would like to help me.

In those days, I stuttered terribly. The only time I didn’t stutter was when I was singing. But I didn’t believe that there was a cure for my condition, so I said, “You can’t help me.”

“Maybe not,” he replied. “But I can try.” And then he gave me a blessing and suggested I see a speech therapist.

I have to tell you something: It is written in the Torah about Moses that there never arose another like him in Israel, yet I venture to say that the Rebbe came close. Like Moses, he was so very humble, offering his help, giving me a blessing, suggesting that I see a speech therapist.

I was skeptical about the power of his blessing, and I didn’t follow his advice to see a speech therapist. I looked at him – a relatively young man with a black beard, only three years in his position as Rebbe – and thought, “What does he know?”

I stayed in the yeshivah less than a month, deciding that it was not for me. And it was not until two years later that I saw the Rebbe again. My father was getting more and more involved with Chabad then, and he came for an audience with the Rebbe, bringing me along.

Before we entered the Rebbe’s office, my father told me to stand behind him and not to say anything during the meeting. But when we came in, the Rebbe leaned over his desk so that he could see around my father and asked me, “Did you go?” referring to the speech therapist. It hit me that, in the intervening time, he must have seen thousands of people, but he remembered our conversation.

I still did not go to a speech therapist. In the meantime, I became a teacher and found that, when I was teaching, I did not stutter although the rest of the time I did.

Things finally changed when my youngest son developed a speech problem at age fourteen. I took him to a speech therapist who said that his vocal cords were underdeveloped, and that, as he matured, the problem would go away – which is indeed what happened.

The encounter with my son’s speech therapist led me to ask if there was help for a condition like mine, and I was referred to a professor at the University of Toronto. When I asked him, “Can you help me?” he answered, “Of course I can.” And it struck me how different his attitude was from that of the Rebbe, who had said, “Maybe not … but I can try.”

I spent two years in speech therapy – I did breathing exercises, I slowed down my speech – and, eventually, I could speak fluently. When I realized that I had overcome the problem that had been a source of much grief during my life, I was filled with gratitude to the Rebbe because he had suggested this solution in the first place, though I had not listened to him at the time. So I decided to go to New York and thank the Rebbe personally.

Many years had passed since our last encounter. But as soon as I walked into his office, the Rebbe said, “I’m so glad to see you again.” After meeting what must have been thousands of people, he still remembered me!

I told the Rebbe about my progress in speech therapy, and what the professor in Toronto had told me – that when I speak fluently, my life will change.

The Rebbe said, “And something more … you wait and see.”

He was so right. When I stuttered, I tended to blame my problems on the people around me who made fun of me. But when I no longer stuttered, I had to take responsibility for my behavior.

When the audience was over, the Rebbe asked me, “Is there anything that you’d like to say to me?” I said, “You gave me a blessing last time; can you give me another now?” To which he answered, “You should have success and blessing … whatever you do, may it be for good.” Then he got up and walked me to the door.

I was so overcome with emotion that I don’t know what possessed me – I leaned over and kissed his cheek. I said, “I can never repay you,” and he responded, “Be good and kind to your fellow Jews.”

I was crying when I walked out.

Mr. Michoel Rubinoff is presently retired from teaching. He spends his time learning in Yeshivat Simchat Shlomo in Jerusalem, where he was interviewed in February of 2017.

In loving memory of Erwin Lapine