The Sight Seeing Trip
5 June 2019
I grew up in Johannesburg, South Africa, in a traditional though not a Torah-observant home. But when I was a kid, my uncle, Dr. Rodney Unterslak, returned to South Africa having become religious while living in England, and he greatly influenced me. I would often spend Shabbat in his home and I quickly developed a deep love for Judaism.
At the time, I was attending a Jewish day school, but no children in the school were religious. When I started wearing a yarmulke and tzitzit to school – the only student to do so – the principal suggested to my parents that I would be better off attending a school like the Torah Academy, a Lubavitch school in Johannesburg. My parents agreed; and I started fourth grade there. 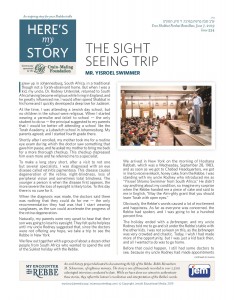 When the Moon Shines in Mexico The War of the Plowshares