When I was fourteen years old, I got carried away with the celebration of Purim and, in that state, I decided to write to the Rebbe. I opened up about everything that was going on with me – all the things that I did which were not so good, all the temptations I faced, and all the egotistical concerns that disturbed me. Among the latter, I mentioned my worry that I was too far behind in my studies to ever amount to anything. 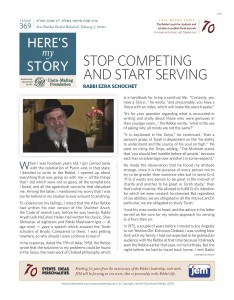 To underscore my failings, I noted that the Alter Rebbe had written his own version of the Shulchan Aruch, the Code of Jewish Law, before he was twenty; Rabbi Aryeh Leib HaCohen Heller, had written his classic, Shav Shmaytsa, at eighteen; and Rabbi Meshulam Igra – at age nine! – gave a speech which amazed the Torah scholars of Brody. Compared to them, I was getting nowhere, so why should I even continue to learn?

In his response, dated the 17th of Adar, 1958, the Rebbe wrote that the solutions to my problems could be found in the Tanya, the main work of Chabad philosophy which is a handbook for living a spiritual life.  “Certainly, you have a Tanya…” he wrote, “and presumably, you have a Tanya with an index, which will make the search easier.”

“As for your question regarding what is recounted in writing and orally about those who were geniuses in their younger years…” the Rebbe wrote, “what is the use of asking why all minds are not the same?”

“It is explained in the Tanya,” he continued, “that a person’s grasp of Torah is dependent on the ‘his ability to understand and the source of his soul on high.’” He went on citing the Tanya, adding, “The Mishnah states that ‘you should feel humble before all people,’ because each has an advantage over another [in some respect].”

He made the observation that he found my attitude strange, since it is the purpose of every person not to try to be greater than someone else but to serve G-d. “If G-d wants one person to be great in the mitzvah of charity and another to be great in Torah study,” then that’s what must be. We all need to fulfill G-d’s intention for which we were created, he stressed. But regardless of our abilities, we are obligated in all the mitzvot, and in particular, we are obligated to study Torah.

I took his wise words to heart, and the advice in his letter served as the core for my whole approach for serving G-d from then on.

In 1975, a couple of years before I moved to Los Angeles to run Yeshiva Ohr Elchonon Chabad, I was visiting New York with my family. I had not expected to be granted an audience with the Rebbe at that time because I’d already seen the Rebbe earlier that year, on my birthday. But the night before we had to travel back home, I met Rabbi Binyomin Klein, the Rebbe’s secretary, and jokingly mentioned that my brother was getting an audience later that day – “Him you let in, but me you don’t let in?”

Rabbi Klein took me by surprise when he responded, “Didn’t you get the message?”

“The Rebbe said that if you want to see him, you are welcome to come,” he answered.

Hearing that, I rushed to where my wife and two children were staying and woke them up. “Dress the kids,” I said, “We’re going to see the Rebbe.”

I was thrilled to have this extra opportunity, which I believe the Rebbe granted me in the merit of my father, as this was within a year of his passing. My father would usually visit the Rebbe at that time of year on the occasion of his birthday, which is probably why the Rebbe agreed to meet me for a second time.

We went in as a family and the Rebbe answered all our questions and requests, and then he looked at us and said, “You have a boy and a girl, so you have fulfilled the minimum requirement of the commandment to ‘be fruitful and multiply.’ But a Jew is supposed to go beyond the letter of the law. Why don’t you have more children?”

I was taken aback by his statement because during the previous seven years, I had written to the Rebbe at least half a dozen times requesting a blessing for more children but I never got a response. Now, suddenly, he was asking me why we didn’t have more children!

And then the Rebbe seemed to abruptly change the subject. He reached into his desk drawer and took out a packet of dollars, giving it to my wife and instructing her to influence as many women as she could to light Shabbat candles. He explained that each woman who undertakes this mitzvah should be given one of these dollars to give to charity. And then the Rebbe turned to me and said, “I want you to publish your Torah insights.”

Having heard that from the Rebbe, we were each motivated to do what he asked of us and we got to work. I published two discourses of my Torah insights at about the same time that my wife gave away the last of the Rebbe’s dollars to women who began to light Shabbat candles. Shortly thereafter, my wife found that she was pregnant and in quick succession, we had two more girls.

At the time, I didn’t connect any of this to the Rebbe’s instructions, but after five years passed without any more children, I published new versions of the two discourses which I had written under pressure to fulfill the Rebbe’s request, but this time I developed the ideas further. The resulting booklets were five times as long as the originals. Within a few months of their publication, my wife became pregnant again with twin boys.

During that audience with the Rebbe, I didn’t realize what he was trying to get across to my wife and me. But later it struck me that perhaps he didn’t tell us that we would have more children if we would fulfill his instructions because he wanted us to act out of our own free will and without expectation of reward. And then, by fulfilling the mission he set for us, we became fitting vessels to bring more souls into this world.

Rabbi Ezra Schochet is the rosh yeshiva of Yeshiva Ohr Elchonon Chabad in Los Angeles. He was interviewed June of 2007.