When I first came to New York from Montreal – in order to study at the Torah Vodaas yeshivah in Brooklyn – I became enamored with the chasidic atmosphere of the neighborhood and began visiting the courts of the various Rebbes. I was a curious kid, just past my Bar Mitzvah, and these visits didn’t really have an effect on me until I encountered the Lubavitcher Rebbe. 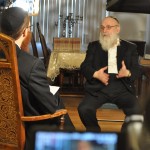 I could tell with my teenage eyes that this Rebbe was different. I couldn’t really pinpoint what it was, but I knew that he was extraordinary.

When I would see him out on the street, he didn’t walk with a silver stick or an entourage around him; he walked alone with his hands in his coat pockets as if he was a simple Jew. I didn’t know much at that age, I was just a youngster, but this I noticed. And after I heard him speak at the farbrengens – for hours and hours – I understood that this man is holy; this man is a real tzaddik.

As a result, I was drawn to Lubavitch and, in 1959, I transferred to a Chabad yeshivah.

But even while I was still a student at Torah Vodaas, I joined a small group of students in a nearby synagogue for a class on chasidic teachings. The chasid who would teach us, also encouraged us students to take on a daily recitation of Chitas, which is an acronym for Chumash (the Five Books of Moses), Tehillim (Psalms) and Tanya (the seminal work of the Alter Rebbe, the 18th century founder of the Chabad Movement). It is a Chabad custom to study passages of Chitas every day.

Now, I had no issue with Chumash, as I had studied it before, and Tehillim was easy to read. But Tanya was new to me. I found it difficult to understand, and I balked at it.

I knew that the Rebbe encouraged this practice, but I asked myself: “When the Rebbe says to recite Chitas, does he really mean me? Shouldn’t I first learn more and begin to study Tanya once I can better understand it?”

This, the Rebbe wrote, is similar to the make-up of every person, who has a body and soul and, even within the soul, there is a revealed element and a concealed element. We can see their effect explicitly from the ideas that move us very deeply – the concepts which we delve into with fiery enthusiasm – and those that we’d prefer to get over with.

Since we want G-d’s blessings in all our daily personal matters, and in order to receive His blessings, the Torah states [that G-d promised them] “if you follow My statutes,” which, Rashi explains, refers to Torah study … Thus, we must learn a minimum of both the revealed element of the Torah as well as its concealed element; Torah’s inner dimension …

He then got to the crux of the matter: “The revealed element of Torah is the Chumash; and the concealed element – this is the Tanya.”

The Rebbe explained that I shouldn’t feel discouraged if I didn’t fully comprehend every statement of the Tanya, because:

It is obvious that just as a child, who is a beginner, studies Chumash differently from the way a great scholar studies…. The same applies to Tanya….

But he also admonished me. He said that I should have begun learning Chitas despite my questions:

The main thing that every yeshivah student needs to know is that he must learn diligently and persistently, and … even if something is not entirely clear to him, he must still do it and, with time, if he applies himself, that which he does not understand will become understood.

That letter had a big impact on me. From then on, I made sure to recite Chitas every day, including Tanya.

Just how important the practice of Chitas was to the Rebbe was driven home to me a short while later by an incident that happened in my dormitory at Torah Vodaas.

Across the hall from me roomed a boy that used to attend the Chabad school in Montreal. He was a very diligent student, but his mother wanted him to leave Torah Vodaas and go to college, even though the boy wanted to continue learning Torah. Because the Lubavitcher Rebbe had himself gone to university, she believed he would be her ally on this issue, so she arranged a private audience for the family.

After she explained the dilemma, the Rebbe responded, “I don’t understand. You are telling me that your son is succeeding in his studies in yeshivah, yet you want to send him to college instead. How can I agree to this?”

The Rebbe went on to test the boy on various Torah topics and, as a result of the audience, the fellow remained in yeshivah.

Then, one evening the payphone in the hallway of the dormitory rang. I knew that nobody was trying to get a hold of me, so I ignored it. But over the course of twenty minutes, it kept on ringing. It got on my nerves, so finally I answered.

Who was on the other end? Rabbi Hodakov, the Rebbe’s secretary, and he wanted to speak to my friend.

The boy didn’t believe it – how could the Rebbe’s secretary be calling him? “You’re crazy,” he said. But I convinced him it was true.

Finally, he went to the phone and when he hung up, he told me the astonishing message he had just received:

Of course, he answered yes.

That’s how much the Rebbe cared about Chitas, clearly believing that reciting Chitas had a profound effect on everyone who did so.

Rabbi Mayer Plotkin is a businessman who directed many Chabad activities in Montreal. He was interviewed in January of 2010 and in April of 2011.